No Incumbents In November

The only power available is to use local tactics. Since about mid-June, have these stickers have been popping up in your neighborhood?

Talk about local action! (and i thought, what a great idea)

Perhaps you'd like a few for yourself, or, would like to learn to make your own (equally easy)? (AS YOU CAN SEE I MADE UP A FEW)

The ones shown are indeed quality as they are with the protective shield to withstand public placement. One sticker has already survived intact, withstanding the elements, for nearly 3 months at an extremely busy gas station - directly in the view of the most popular pump-  at eye level. 1000's of close up, captive audience, impressions. They have been seen locally at ATM's too (the fraudulent bankers?).

In the observed case of the gas station sticker, not one person, ........... not one employee .......... - felt the need to suppress the public point of view. Almost as if it were expressing a national universal sentiment the mainstream media is ignoring. It's TOO LOCAL.

But it would be local everywhere if this observed phenomena spread it's wings. And the press could ignore it as it does much. But, then, November would come and the voters will have a chance. They will have seen the message all over town, and wondered if their neighbors saw them too.

The act of not voting for an incumbent - if it became a national neighborhood local movement - would overthrow a large portion of the government of politicians. (Except for the unopposed - but, what if THAT count, when made public, actually showed NO one voted for the unopposed after all?) OR ALMOST NO ONE. OH, THEY ALWAYS  REPORT THE NUMBER AS 100% VOTING FOR THE INCUMBENT.

Who's the incumbent you ask? Easy, in most states they mark them with the asterisk* - how convenient; (lol) golly gee,  I wonder what the reason is for that? 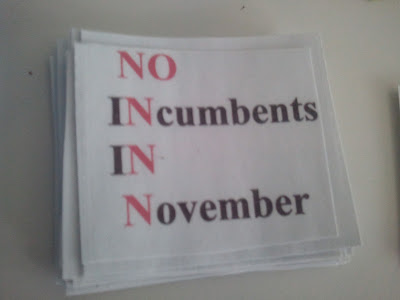 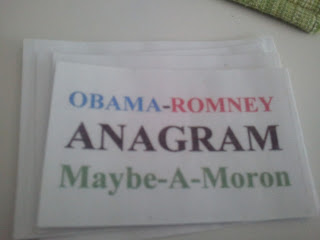 note: these stickers are easy to make

buy Avery 3 1/3"x4" Shipping labels, Laser Ink Jet, (25 sheets and 6 sheets per label) use their free software to design your own message or copy the `No iNcumbent iN November' pledge preferably

Now you have the sticky back via the shipping label - now to protect the front - you buy a transparent roll of contact paper that you will place over the front of the label.  Cut to the size of the message. Now it is waterproofed and will hold up for some period of time.
Lots of impressions.
Like, until November.

ultimate cost is under a dime a sticker
EXCEPT FOR TIME AND PREPARATION COSTS SUCH AS the energy independence GAS we have all been promised for 4 decades of Republicans and Democrats for President!