Spoonbending Party At The Rhine Center - Do These Folks Look Like Hoaxers? 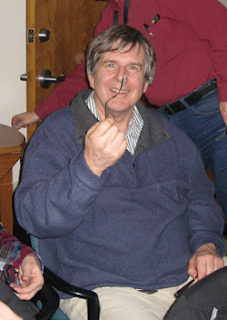 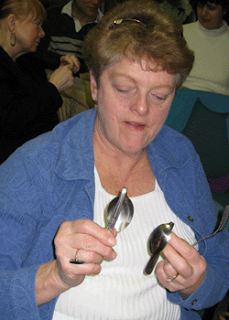 A number of years ago I had the pleasure of speaking with Sally Rhine at the Rhine Center about an anomalous event that happened to me while enjoying an evening of juggling with a buddy and his juggling friends. She recorded my event (perhaps I will tell the story here someday) and I ended up on the mailing list for the Rhine Center.
Here's the Wiki take on The Rhine Center - The Rhine Research Center Institute for Parapsychology (successor to the Parapsychology Laboratory at Duke University in Durham, North Carolina, and Rhine's later laboratory, the Foundation for Research on the Nature of Man [FRNM]) is a parapsychology research unit that "aims to improve the human condition by creating a scientific understanding of those abilities and sensitivities that appear to transcend the ordinary limits of space and time." The institute is named after its founder J. B. Rhine.
The research that J.B.Rhine did and the data he collected is famous or infamous.
However, regardless of that - the institute continues and seems to be developing an interesting approach and outreach to the public and members. So, in that regard - I bring to your attention that tomorrow night, in Durham, NC. - March 26th - at 7:30 - 9:00 PM - there will be a spoonbending party - this link will tell you more (if it isn't sold out yet) - http://www.rhine.org/events.htm#PSI_Games
More pictures of the last spoonbending party -> http://www.rhine.org/spoonbending.html
So, the topic that Uri Geller made famous and infamous and discredited -- has slowly been making a seeming comeback. Somehow, events are occuring that seem to be outside of the common consensus as to what is possible. Events that describe possible ways of perceiving not generally spoken about. Because if you really think these folks at the top of this page are hoaxers, then, for sure, you are a bigger skeptic than me.
Can bending a spoon be nothing more than the belief in a limited space location that it is possible?
Today's video is a Remote Viewing lecture at Rhine.

Books About This Subject Matter: